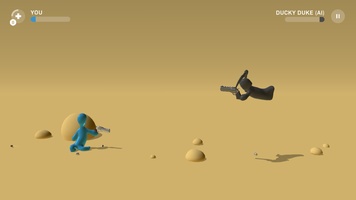 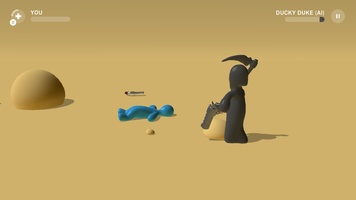 Advertisement
Gumslinger is a fun shooting game where players take on the role of a character made of candy to duel to the death with different enemies.

The gameplay in Gumslinger is very simple. A duel starts with you stood in front of your enemy, who is another candy character. To aim your gun, tap the right of the screen and to shoot, tap the left. You must try and land as many hits as possible before your enemy kills you. The idea is to accumulate kills and avoid dying at any point. The more kills you build up, the more stars you receive that you can later use to unlock special weapons.

One of the most noteworthy features of the game is the funny animations. When you shoot one of the gummy characters, their skin shakes and they wobble all around the screen. What's more, the weapons are customizable for you to create the perfect-gunned dueling team. This, together with the colorful design of the characters and the Wild West environment, gives the game a causal and fun appearance.

Gumslinger is a fun shooting game where there's only room for one survivor.

The best game, record it